"John Was A Titan" 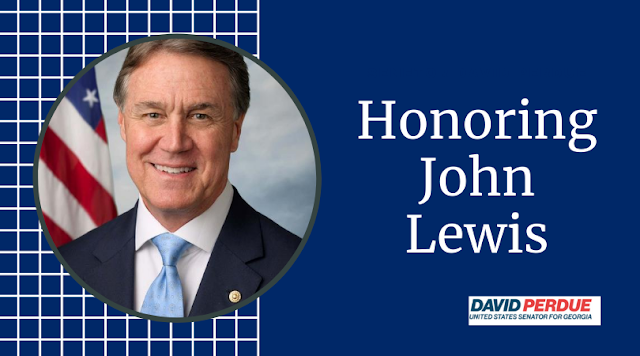 Embodiment Of Greatness: “Throughout all of human history, in every generation, there are a handful of people who rise to the level of greatness. Despite adversity, danger, and sometimes impossible odds, these great men and women fight for what is right, push our society forward, and make America better for the next generation. Representative John Lewis, who just passed away last week, was certainly the embodiment of this type of greatness.”

Titan For Civil Rights: “John was a titan in the struggle for civil rights and the equality of all races. Because of him, more Americans can enjoy their God-given rights to life, liberty, and the pursuit of happiness.”

Peaceful Progress: “John Lewis never backed down from the fight for what is right. He always remained peaceful, despite receiving physical violence and going to jail for his protests. His commitment to nonviolence served as a guiding force in John’s life.”

Truly Great American: “Today, our country is mourning a hero, a truly great American, and a great Georgian. As we continue to say our goodbyes, we should also take this time to reflect on John Lewis’s life and what he stood for. We should take this as a call to action to continue the effort to which he dedicated his life.”